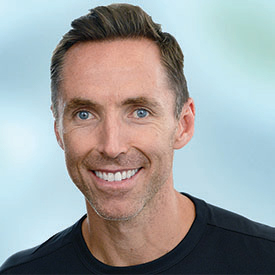 Steve was born in Johannesburg, South Africa, into an athletic family. After two years, the Nash family immigrated to Canada to avoid raising their children amidst apartheid. Steve grew up playing sports, and his basketball career took off when he went to Santa Clara University on the only basketball scholarship offered him. After leading the Broncos to three NCAA Tournament berths, he graduated with a BA in Sociology. In 1996, Steve was drafted 15th overall to the Phoenix Suns playing for two years before being traded to the Dallas Mavericks. After a successful run with the Mavericks, Steve began a new basketball family with the Suns, and also one of his own, welcoming twin daughters in 2004 and a son in 2010. In 2012, Steve was traded to the Los Angeles Lakers, where he played until his retirement in 2015. Over his career, he was an eight time NBA All-Star. Steve attributes his success to a capacity for discipline, a drive to succeed, and efforts towards health, nutrition, and adequate sleep. Steve provides an energized example of how to give back through the Steve Nash Foundation, as General Manager of the Senior Men’s National Team in Canada, part-owner of the Vancouver Whitecaps, and other enterprises.