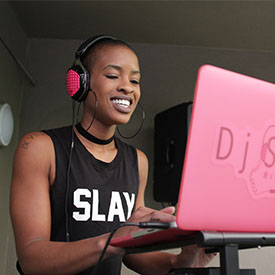 Shai'La Yvonne is a model, actress, and DJ, hailing from the San Francisco Bay Area, now living in Los Angeles, California. DjShai (pronounced dee-jay-shay) has been quite successful in her three years as a DJ. After moving to LA, DjShai began spinning at luxury, private events all over the city. She is resident DJ with Talent Resources and Kia Motors at their private Malibu Beach House and has spun for brands such as Saks Fifth, New York & Co., Athleta, Jetsetter, BET, and Coca-Cola. On the modeling side, Shai'La’s photos have been published in Essence, New African Woman, Focus of New York, VOLO, Elegant, and PUMP magazines (to name a few). She participated in San Francisco Fashion Week, Los Angeles Fashion Week, and New York Fashion Week. Shai’La hopes that she inspires people to stay true to themselves and what they love. You can check out her playlists here: SoundCloud  | MixCloud | DJ Website | Modeling Website | DJ: Facebook | Modeling: Facebook | IG