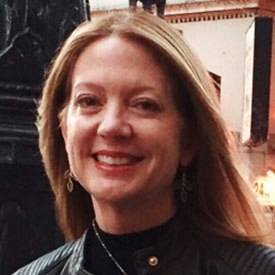 Rose is a Bay Area native who attended San Francisco State, earning a B.A. in French and later completing a Master’s Degree in French Literature at San Jose State.  While she was at San Jose State she was an exchange student in Paris, where her love of the French language and culture blossomed. She then moved to Paris and studied at the Sorbonne, earning a second Master’s Degree.  After moving back to the U.S., she worked at the French American School in Cupertino and in the President’s Office at Stanford University.  In 1997 she joined the faculty at Archbishop Mitty High School where she has served as lead French Instructor, Community Service Coordinator and peer Educational Technology Instructor.  Rose is a recognized leader in educational technology and has been a presenter at the Exam Soft Educational Assessment Conference and the Middlebury Institute of International Studies at Monterey.  She recently joined the Advisory Board of Look What SHE Did!