As Ambassadors of Criminal Justice Reform, we're honored to support change makers like Jay Jordan, Californians for Safety and Justice and Nipsey Hussle who helped launch the Time Done movement before he passed.  As many of us continue to mourn the loss of this prolific artist, entrepreneur and activist, we also continue to amplify this important campaign to change policies that negatively impact 70 million Americans who face a lifetime of barriers due to a past conviction or record.

On a chilly October night at the Greek Theatre in Los Angeles, several of us watched Nipsey Hussle, Goapele, Ty Dolla $ign launch the #TimeDone campaign. In between their performances, we stood with pride as concert goers watched feature videos that we produced with Red Earth LA, sharing the stories of Jay and several others impacted by the 48,000 legal restrictions on people living with past convictions. 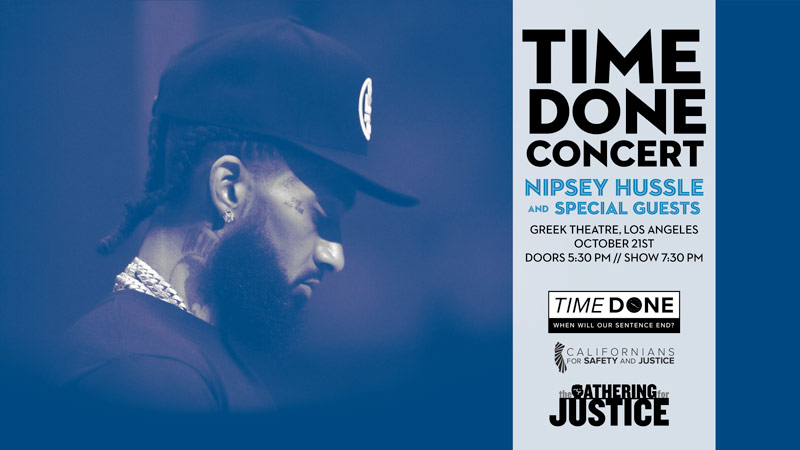 Fast forward from that night and we were with our fam from Crime Survivors for Safety and Justice at #SurvivorsSpeak Florida when we got the news that Nipsey Hussle had been shot and pronounced dead.  We stood in front of a team of people ready to welcome crime survivors from all over the state of Florida just as close-to-home violence stole our enthusiasm and weighed on our hearts in a tragically familiar way.

Those of us old enough to experience the tragic deaths of Tupac, Biggie Smalls, Mac Dre and many others were familiar with this feeling.  Just as an early generation knew the sting of violence with giants like Marvin Gaye and Sam Cooke, we knew once again that we'd lost a hero, a role model and a young man with influence who was trying to do more good in his community.

In the work of doing good, we are often in close contact with tragic topics, negativity and the realities of the darkness that our human society is capable of.  So it was especially gratifying to watch the internet embrace and widely share this recent video that paid tribute to Nipsey and reminded viewers that the work of #TimeDone is just getting started.

Criminal Justice Reform is one of the Ambassadors Circle's 9 passion areas, and we are humbled to be able to support and amplify this important work. We are thankful to the creatives we work who help us produce digital media with meaning that can influence and carry a positive message around the world.

We invite and encourage you to watch and share the suite of videos and text Time Done to 72345 to join the movement.

Just like the marathon, the work to do more good continues. We thank all of you around the Circle for your support and dedication to make change happen in our lifetime!