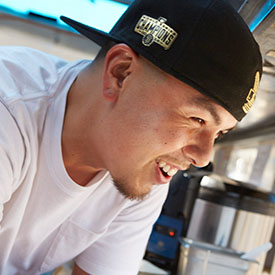 If anyone has redefined contemporary street food in San Francisco, it’s longtime pals Evan Kidera and Gil Payumo’s Señor Sisig fusion food truck. With their special twist on a Filipino happy hour dish, sisig, Señor Sisig took the portability of their favorite Mexican taqueria dishes with the popularity of sisig. Though sisig is traditionally made from parts of the pig’s head, Señor Sisig’s more palatable version uses the meatier pork shoulder. Though Gil and Evan met in high school in Daly City, California, and followed their own respective paths, Evan receiving his MBA at San Francisco State and Gil graduating from Le Cordon Bleu Culinary Academy, entrepreneurship and food runs deep in both of their families’ bloodlines. It was only a matter of time before their shared love of Filipino food would turn into a fusion rolling restaurant, with Chef Gil at the grill and Evan at the wheel.